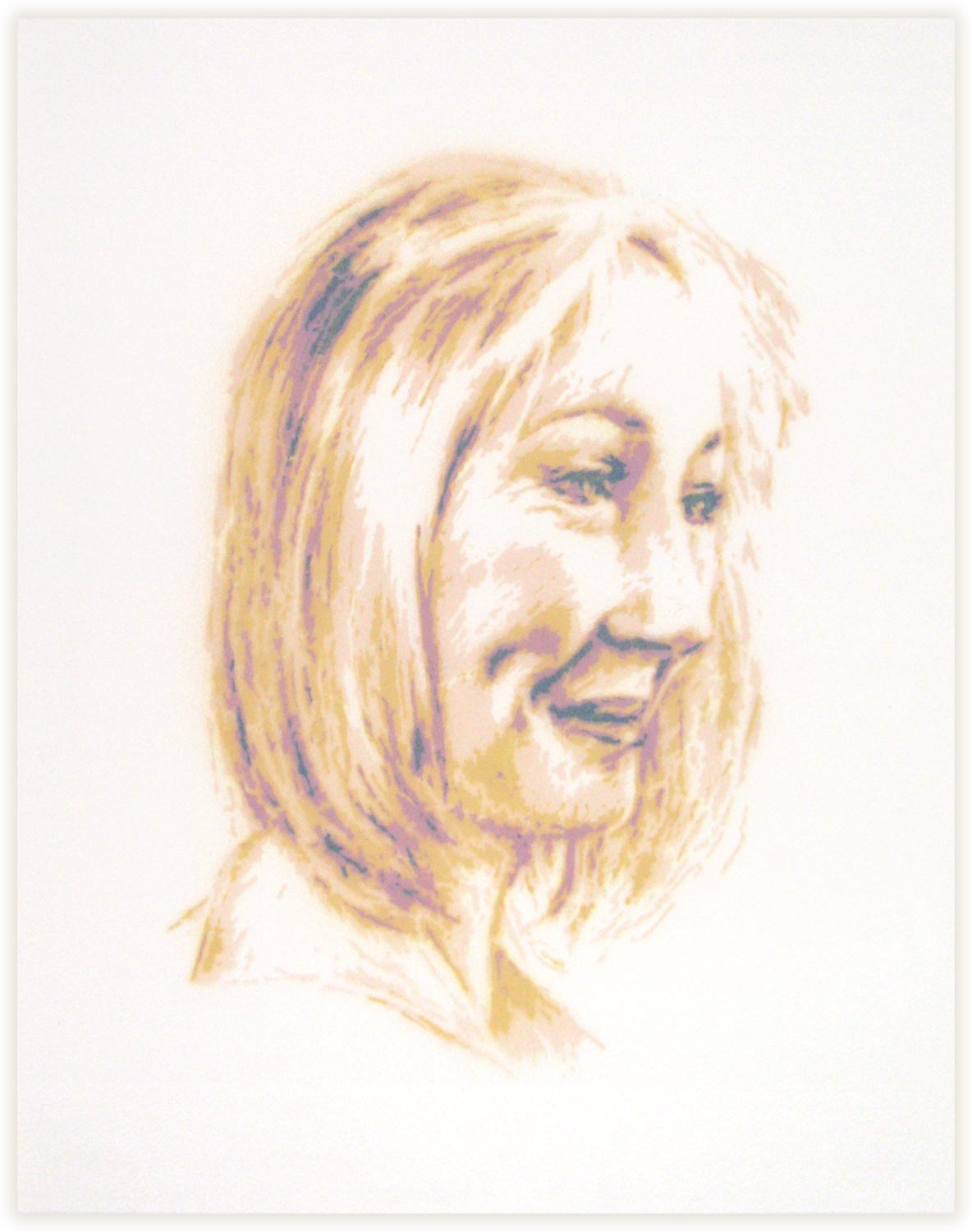 The JK Rowling Portrait isn’t the first stencil portrait I made in the early days of my Jim Public website, but it is the portrait that one of you bought most recently, so Jo is fresh on my mind. This article talks a little about why and how I made this portrait, and it is the second post of my website’s 10th anniversary celebration.

I once created a chart called “All Art Is Abstract Art,” which I still stand by, but it is equally true that All Art Is Fan Art. Artists are inspired by things that other people make; few of us make artwork as a spontaneous activity, detached from the things that we’ve seen other people make. The history of art is largely the history of artists loving stuff that other artists made and then making new artwork as result.

I love the Harry Potter novels, and this love has abided through:

Rowling is still an author I greatly admire, but I’m not planning to write a book that pays homage to Rowling as Philip Pullman honored Blake, Milton and others with His Dark Materials. I opted for creating a portrait instead.

How to Make a Portrait of JK Rowling

In setting out to make an original portrait of Jo, I did not have the traditional, crucial resource at hand: JK Rowling was not around to sit for the portrait. I do not like the idea of plagiarizing someone else’s photos, so I gathered about ten photos of her from the web and started sketching. Ultimately, I created my own amalgamated image of a stylized Jo using all of these images as referents but, in the end, creating something new with pencil and paper. 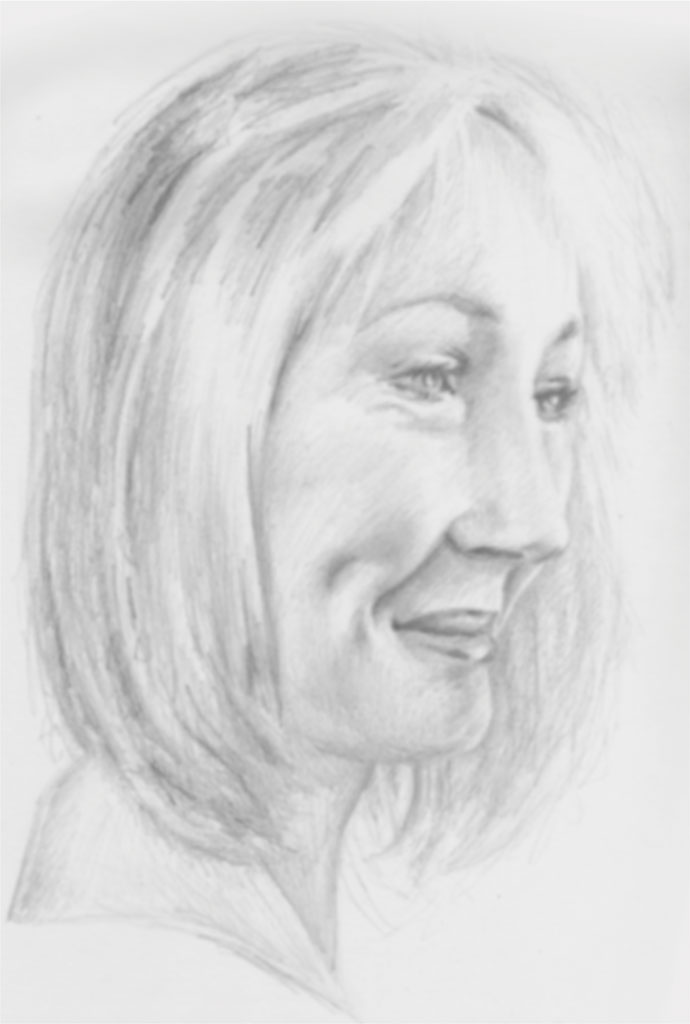 From Drawing to Stencil

A guiding philosophy of the Jim Public website is the mission to create high-quality, hand-made, affordable artwork that is fun for me to make. I love working with color, and I love spraying paint, so stenciling has become a core technique that I use to fulfill this mission. Stenciling is a way to make multiples (which are affordable) that are more hand-made than digital prints.

So, with a finished graphite drawing in hand, I scanned it into Photoshop and manipulated the image so that I basically had four-color separations. I then experimented with color palettes until I found four colors that looked nice together and worked with the drawing. 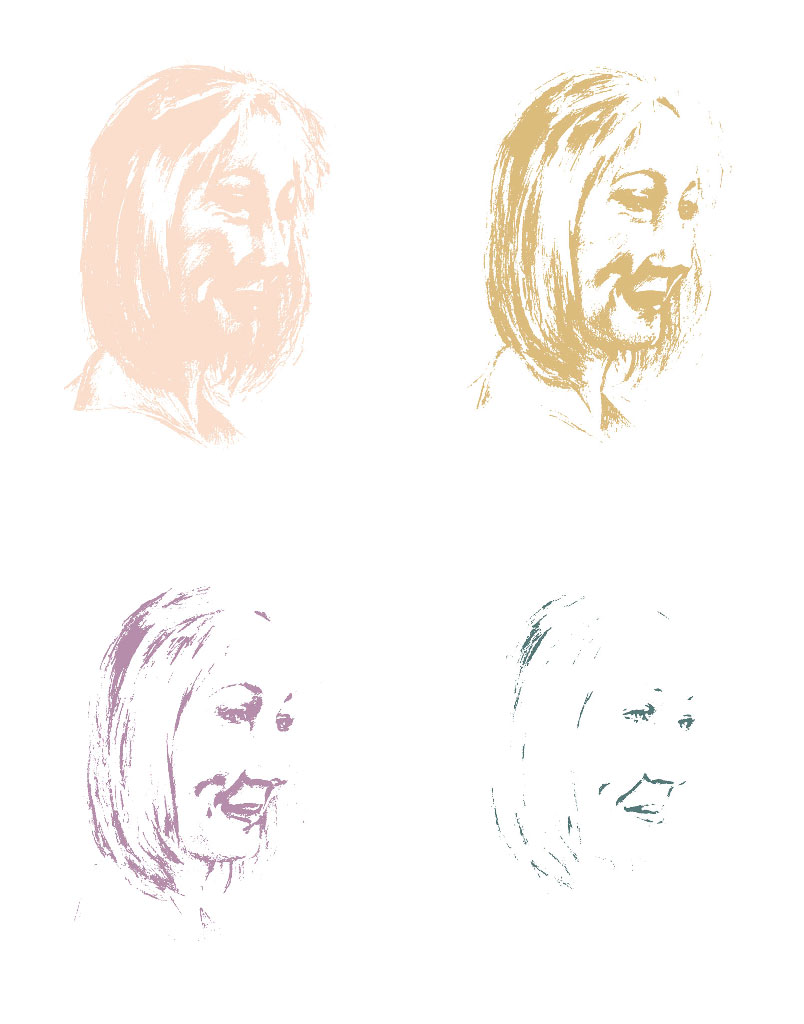 From Stencil to Painting

Each color layer of the image actually needs two stencils for me to achieve 100% color coverage, so I cut out those eight stencils and registered them to an 11” x 14” piece of watercolor paper so that the image would line up as I added each layer.

After mixing my acrylic paint to the right colors and consistency, I made an initial run of ten JK Rowling Portraits with a cheap airbrush.

JK Rowling is probably the author whose work I’ve logged the most hours reading, even if you don’t include the audiobooks. The Harry Potter books hardly need any more endorsements, but I am still amazed at how perfectly they achieve what they set out to do: they narrate a hero’s journey with the school-setting charm, humanist ethics and inventive (but somehow not annoying) magic. I am grateful to have Rowling’s work as read-alouds for my kids, and I hope to get to read them to grandkids one day, if my own children don’t call dibs.

The JK Rowling Portrait is a limited edition, hand-made stencil painting that you can buy from the Jim Public shop.